Electricity will be available 24 hours in the coming days: Dr Mahesh Sharma 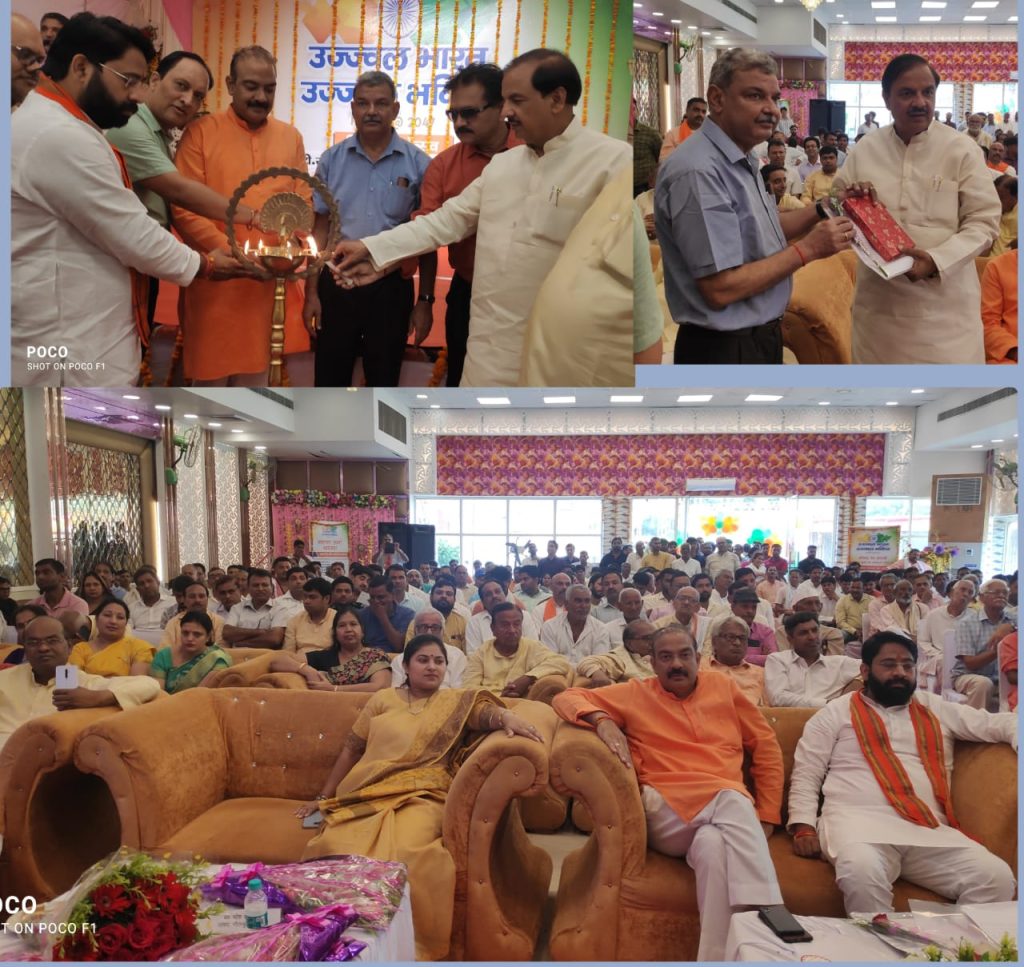 Bhaskar News Service
Secunderabad. Under the Amrit Mahotsav program of Independence, Electricity Festival was celebrated in Secunderabad under the chairmanship of BJP’s Gautam Budh Nagar MP Dr. Mahesh Sharma. He highlighted the schemes run by the government.
On Saturday, the Electricity Festival Ujjwal Bharat Bright Future program was celebrated at Prem Garden located on GT Road of the city. The program started by lighting the lamp by Dr. Mahesh Sharma, Member of Parliament.
There is a BJP government at the center for the last 8 years. The works in the public interest of the country are being done very fast by the central government. Due to this, a program was organized by the area MLA Laxmi Raj Singh and the Electricity Department under the Ujjwal Bharat Ujjwal Bhavishya Yojana in Prem Garden located on the highway of the city on Saturday. During the program, Chief Guest Dr. Mahesh Sharma said that the work which was not done in the last 70 years was done by the Central Government in just 8 years. He told that today electricity is available in every village in every region of India. People are advancing their work, children’s education, industries and businesses through electricity. At the same time, he told that in a village in Assam, people had never seen electricity for 70 years. The Narendra Modi government set a record by providing electricity to that village and he told that in the coming days, the country would get 24 hours electricity. Also he highlighted about the schemes by the central government. Reaching home. There is neither any middleman nor any broker in this, the beneficiaries are getting the benefits directly. Similarly, while highlighting the schemes of the Yogi government, he said that the UP government is taking all its schemes to the people. During this, regional MLA Laxmi Singh said that the power system in Secunderabad assembly constituency will improve a lot as all the dilapidated wires in the city have been replaced and said that earlier people had to make rounds of officials to get the transformer replaced. , but now the transformer is available in 24 hours. Also he said that for any problem of electricity, people can meet the officials at any time. Which will be resolved soon. In the program, District President Anil Sisodia, Siana MLA Devendra Lodhi Khurja MLA Meenakshi Singh also highlighted the schemes of the Central Government and the State Government. During this, small children of the school presented street plays and Sanskrit cultural programs, the chief guests honored small children by giving presentation letters, the employees of the electricity department who did good work were also presented by the chief guest and legislators. Awarded by giving People were shown about the schemes and electrification by the fellow central government through LEDs. During this, MP Dr. Mahesh Sharma Regional MLA Laxmi Raj Singh Singh Siana MLA Devendra Lodhi, Khurja MLA Meenakshi Singh, District President Anil Sisodia, MP Representative Suresh Sharma Arvind Dixit District Minister Usha Bansal, Pandit Sachin Sharma, Dr Pradeep Dixit, Hemant Sharma, Block Prominent husband Pushpendra Bhati, Balveer Bhati in East Block, City President Dinesh Paliwal, Former City President Pinky Vohra, Usha Bansal, Nidhi Garg, Geeta Goyal, Pradeep Sharma, Dhareshwar Saini, Narendra Saini, Naveen Gupta, Naveen Sharma Keshav Ram Ghanshyam Saini, And senior officers of the Electricity Department were present. And all BJP workers were present. After the program, the Electricity Officers listened to the complaints of the people and resolved them.

Previous ArticleBhojpuri Sexy Video: Amrapali and Nirhua did a hot romance in the bathroom, the audience stopped breathing, watch the video
Next Article NSA Ajit Doval Remark: Contribution of every religion and religion in progress, some people are trying to create misunderstandings – Doval

BJP promises, parking problem in Delhi will end if it wins the MCD elections

Will Satyendar Jain get food of his choice in jail? Tihar administration said – no request related to fasting was received

Start the day with Orange Peel tea instead of tea, you will get these benefits