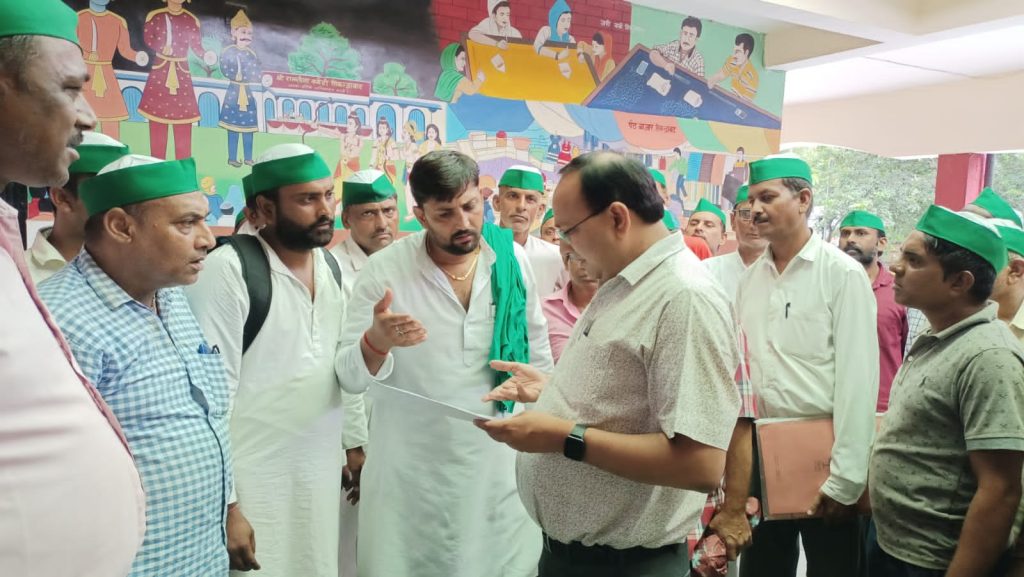 Secunderabad. On Sunday, the Bharatiya Kisan Union Sampoorna India held a meeting in a banquet hall on the highway. In which the new members were sworn in by wearing a cap. After the program, hundreds of workers, under the leadership of state president Pawan Teotia, reached the tehsil in Jokhabad industry area, the atrocities and exploitation being done by the company with the employees in the name of lockdown, 25-25 years old employees without pay till now from the company. A memorandum was submitted to SDM Rakesh Kumar Singh regarding his reinstatement. In the memorandum, Bhakuyu entire India warned of agitation if the demand for the reinstatement of company employees was not met by Wednesday. State Vice President Anil Kaka said that the land mafia is doing arbitrariness in the district. During this, Chaudhary Pawan Teotia, Anil Kakka State Vice President, Satpal Singh, Rakesh Gupta, Ramjit Singh, Vikas Teotia, Trilok Chand, Pankaj Chaudhary, Anil Teotia, Kapil, Jitendra Singh, Sandeep, Sachin, Dinesh Wasim Akram along with hundreds of people workers were present.

Previous ArticleAkshara Singh Hot Video: Akshara Singh created havoc on social media with her video, fans lost their sweat after watching the video
Next Article Fats Burn Tips: Not only gym, this cardamom is also effective for weight loss, know how

Copper Water Benefits: Know when you should not drink water kept in a copper vessel, for how long it is necessary to keep it